Today, although construction projects are tried to be based on green and smart discourses, it is seen that the targeted benefit is not achieved mostly due to commercial concerns. In projects without financial concerns; Due to the insufficient engineering analysis and lack of lifetime cost approaches, buildings that have been launched as green and / or energy efficient often do not go beyond being just technological elements. Having technological elements in a building is not enough to make it efficient most of the time.

Building energy modeling plays a vital role in determining the capacities correctly in the investments of air-conditioning systems and making the capacity predictions of a possible cogene-trigen investments healthier.

With the modeling created over 8760 hours, the effects of all kinds of system investments on building operating costs are analyzed in detail. 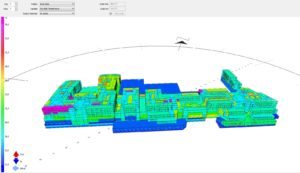